On April 3, 2019, the first meeting of the NeuroNet team was held at the Ministry of Education and Science of the Russian Federation. 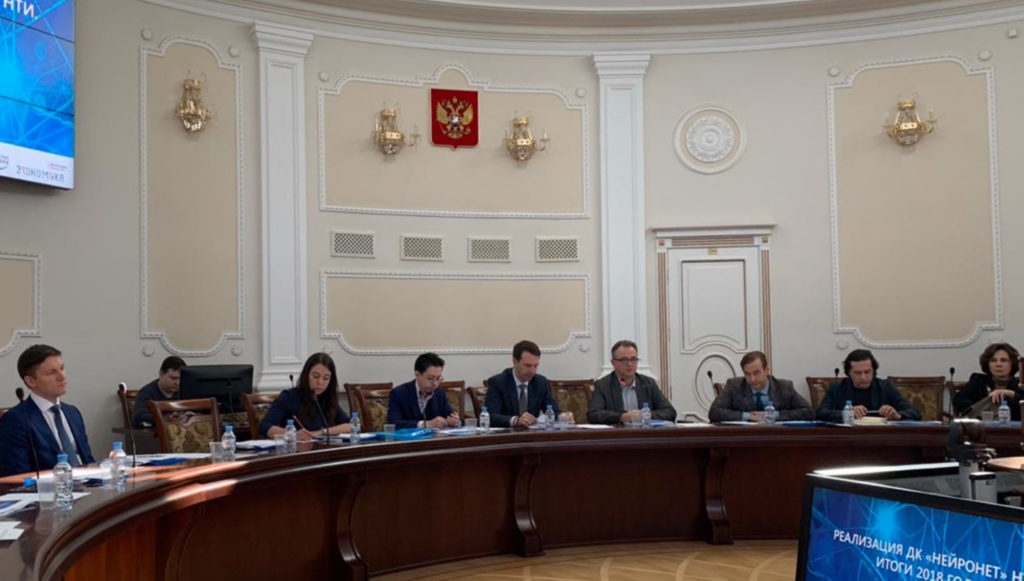 The team’s mission is forming the globally-competitive Russian segment of the NeuroNet market by 2035, ensuring the emergence of at least 10 national “champion companies”. The meeting was hosted by co-executives of the NeuroNet team: Grigory Vladimirovich Trubnikov (First Deputy Minister of Education and Science of the Russian Federation) and Andrey Aleksandrovich Ivashchenko (Chairman of the Board of ChemRar). During the event, those present discussed the roadmap progress: specifically, the results of the first stage of the community formation, infrastructure development, passing the administrative obstacles, and improving the legislative framework. Also, the specialists drew up the guidance for the second stage.

“The major achievement of the first stage of the NeuroNet roadmap was the mobilization of hundreds of technology influences in terms of realizing the NeuroNet projects. We hope dozens of them will enter the global markets at the second stage and national champion companies will emerge by 2035. In 2018, the expert made a great effort on adjusting the roadmap. Specifically, they increased the forecasts for main NeuroNet segments by 2035. The greatest growth was demonstrated by such segments as Neuroassistants due to the rapid growth of AI-related technology”, told Andrey Ivashchenko when opening the meeting.

Executive Officer of the NeuroNet Industry Union Aleksandr Semyonov mentioned that the actualization of the NeuroNet roadmap and adjustment of the legislative framework for stakeholders’ benefit will be continued. As part of implementing the second stage, NeuroNet will launch a series of acceleration programs (Russian and International) to boost teams, increase the level and quality of projects, and help them find corporate partners and investors and run export activities. From all the accelerators, six have already been launched early this year, currently selecting projects. The interaction with competence centers of the National Technology Initiative is being established. It includes the cooperation with the expert community and involving the centers in project acceleration programs.

Besides, the NeuroWorking open-space will be opened this year to offer conditions for supporting entrepreneurial initiatives. During Island 10–22, a summer intensive course for university managerial teams, NeuroNet will organize its educational track. Moreover, it will conduct traditional assistive technology contest titled Neurothlon in fall 2019.

From the most important events within this stage, Skoltech Vice President Aleksey Konstantinovich Ponomaryov mentioned the necessity for integrating with the facilities of the federal project titled Digital Economy. Professor Aleksandr Yakovlevich Kaplan and academy fellow Pavel Miroslavovich Balaban drew the team’s attention to the need for emphasizing the Neuroscience across all the state programs due to its high viability — the way it is already realized in the world’s leading countries. Aleksandr Valeryevich Semyonov also mentioned the readiness to cooperate with the Ministry of Education and Science of the Russian Federation within the 2014–2020 Federal Program Studies and Advancements Across the Top-Priority Lines of Developing the Research and Technology Complex of Russia (measures 1.2, 1.3, 1.4).

During the meeting, infrastructure projects were considered and approved (e.g. Smart Open Virtual Assistant, Cybersports Platform, Virry Lifestyle). As part of the roadmap, they may stimulate the foundation of numerous new technology startups and fields.

At the end of the meeting the team considered and approved the admission of another participant, Maksim Sergeevich Vakshteyn, Deputy CEO and Head of the Department of Information Research of the Fund of Perspective Research. He noted that he would like to complement the activity of the team with competence in the field of neuromorphic electronics — i.e. specialized neural network processors enabling power-efficient execution of machine learning algorithms based on the math framework of deep neural networks. Also, he would like to organize the neural technology-powered communication between developers rendering services to the defense industry and civil industry professionals.