On May 17, at the Headquarters of the State Hermitage, within the framework of the 9th Saint Petersburg International Legal forum, the 2030 Strategy for Developing the Pharmaceutical Industry of Russia was discussed. The session involved First Deputy Minister of Industry and Trade of the Russian Federation Sergey Tsyb, CEO of Sintez OJSC Sergey Klykov, CEO of BIOCAD CJSC Dmitry Morozov, President of Aktivny Komponent JSC Aleksandr Semyonov, and CEO of ChemRar Pharma Elena Yakubova. Chairman of the Board of the Union of Pharmaceutical and Biomedical Clusters of Russia Zakhar Golant was the event moderator. 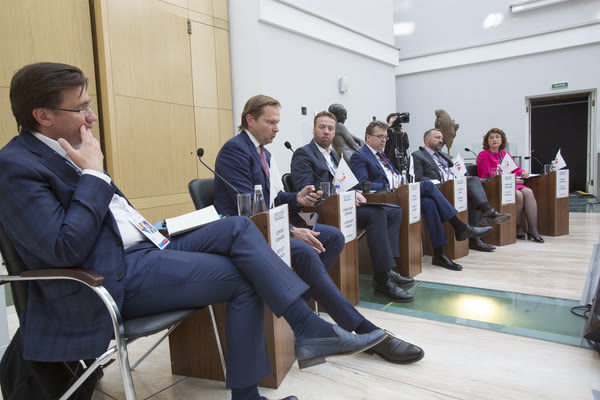 First Deputy Minister of Industry and Trade of the Russian Federation Sergey Tsyb presented other participants with the document’s major goals and noted that the pharmaceutical industry development strategy will let expand the Russian pharma drug market by more than twice by 2030. He also recalled that Pharma 2020 was called to put things right in the industry and modernize it, implementing international practices and introducing technical advancements. All those tasks were successfully executed, while the scope of investments in the Russian pharmaceutical industry has exceeded 200 billion rubles to date. According to Sergey Tsyb, since Pharma 2020 had been put into effect, the Russian pharmaceutical market gained some 1.5 trillion rubles. As expected, the growth will sustain within the next 10 years.

“The key purpose of our strategic memorandum is ensuring stable conditions for the development of the domestic pharma market, including making Russia completely independent from imported goods across all the social-value segment; and the development of the export-oriented potential of the pharmaceutical industry and active support of the drug export to external markets. It may seem that these goals are parallel. But what we can state for sure is that they do not conflict. Instead, they only complement each other”, said Sergey Tsyb.

Elena Yakubova, ChemRar Pharma CEO, who participated in the discussion, noted that Pharma 2020 not only enabled the Russian market professionals to build new factories of sufficient power to provide the Russian residents with essential drugs and acquire competence in quick and high-quality production of generics, but also laid the foundation for creating in-house innovative drugs. What is important in this context is preserving this foundation and including innovation development in the new Strategy version. Following this, hundreds of promising projects supported by the Ministry of Industry and Trade of the Russian Federation and working on different research stages will not be racked out — instead, they will be embraced by major players and introduced to the market.

“Currently, we can’t see any eager interest of the Russian pharmaceutical market in early innovative advancements. Should we stop supporting them, we can lose the 5-year stable growth and get the whole vertical draw back to 2010 performance. It is obvious that Pharma 2030 must be primarily focused on innovations as we will not be able to export generics while the domestic generics competition will lead to the drop in factory revenues and prompt them to shut down. One of the innovation stimulation methods could be the innovation import substitution index as a Pharma 2030 KPI. We could start implementing this approach from state procurements in the field of social-value diseases (e.g. oncology, hematology, virology, etc.), and reach the level of 50% in terms of value by 2025. Besides, the problem of the accelerated registration of breakthrough drugs has been on the carpet for years. All the key experts (including specialists from the Ministry of Health) agree that such an approach is needed. However, the issue remains unsolved”, said Elena Yakubova. She believes these very measures will facilitate the successful implementation of Pharma 2030.

In terms of exporting Russia-produced drugs, CEO of Biokad CJSC Dmitry Morozov suggests there are some obstacles, “First and foremost, Russia has not joined to ICH and PIC/S — the standards regulating the production and marketing of drugs adopted in countries with the developed pharmaceutical market. Secondly, internal production and regulation standards in Russian pharmaceutical companies are not kept consistent with international standards. Thirdly, Russian manufacturers feel short of resources”, CEO of BIOCAD lamented.

Session participants also discussed the acquisition of international certificates for pharmaceutical substances, support for full-cycle production (from substances to ready-made drugs), and methods for spurring and developing the competition both on the domestic and international level.