The winners of the sixth annual National Rating of Russian High-Tech Rapidly Developing Companies TechUspekh-2017, organized by RVC together with PwC, the Association of Innovative Regions of Russia and the National Research University Higher School of Economics, were announced on December 12, 2017. Data for more than one hundred domestic technology companies was collected. The most successful companies were selected in three categories: TOP 10 largest companies (by revenue), TOP 10 fastest growing companies (by revenue growth) and TOP 10 innovative companies — (technological level of their production, its originality, company’s intellectual property, as well as expenditure on R&D and technological innovation). 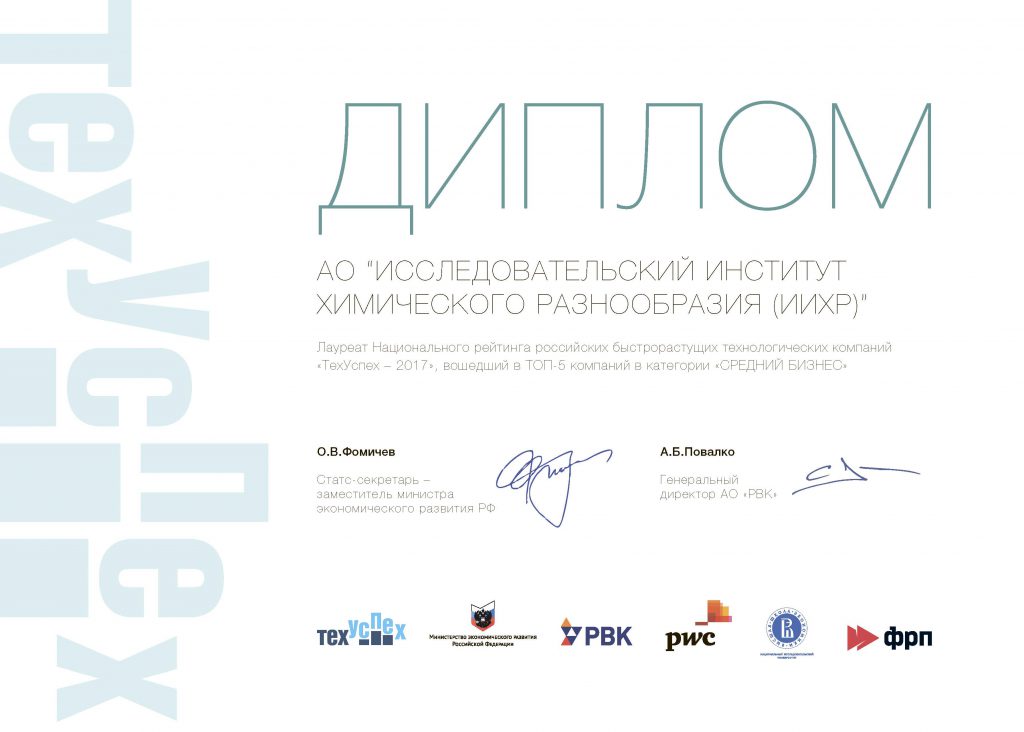 Chemical Diversity Research Institute (CDRI) of ChemRar Group was among the five leaders of the rating in the category “TOP 5 medium-sized companies”, among companies with the revenue between 800 million to 2 billion rubles, and also won the ratings: “TOP 10 companies with high export potential”, “TOP 10 innovative companies” and “TOP 10 fastest growing companies” in the category of “Medium-sized business”. In addition, according to the rating, JSC CDRI became the participant of the “National Champions” project for support of private high-tech companies-leaders, which aims at ensuring accelerated growth of the domestic private high-tech export-oriented companies that are leaders, and creation of transnational Russian companies on their basis.

“The participants of the TechUspekh rating become more and more effective every year, innovation remains their main driver, significantly the share of small high-tech companies increases significantly. In 2016 TechUspekh was the official instrument of selection of companies for the priority draft project of the Ministry of Economic Development “National Champions”, aimed at supporting the accelerated growth strategy. In 2018, the rating may be the basis of the search mechanism for promising companies for the NTI global markets. We plan to continue active interaction with the participants of the rating — to support them in the framework of the NTI, to offer investment instruments, to help the interaction with state corporations and development institutions”, commented Alexander Povalko, the General Director of RVC.

CDRI is the base organization of ChemRar Group carrying out the full development cycle and commercialization of medicines, as well as having a number of its own products and developments. In the late 1990s, it was one of the first in the world to start mastering the methods of parallel and combinatorial synthesis of organic compounds libraries for high-throughput screening. Today CDRI has world-level expertise in the development of innovative drugs that are in demand on the international market. The experience and the expertise gained over 27 years of work in this field allow the company to move further and further away from a service business to its own developments. The production of CDRI is organized in accordance with the GMP standard and equipped with the most modern technological equipment.

The full list of companies included in the ranking, as well as their key performance indicators can be found on the website of the rating.

ChemRar Group unites R&D service and investment companies in the field of innovative pharmaceuticals for the development and commercialization of innovative medicines, diagnostics, preventive care and new treatments of life-threatening diseases in Russia and abroad. www.en.chemrar.ru