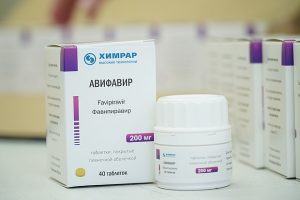 In June, the drug was delivered across Russia’s 35 regions and to the Republic of Belarus. Agreement has also been reached for deliveries of Avifavir to the Republic of Kazakhstan in the near future. In total, more than 100,000 courses will be produced in July.

The joint venture established by RDIF and ChemRar Group provided an additional opportunity to increase production capacity threefold, up to 300,000 courses per month, which will satisfy domestic demand for Avifavir in the Russian Federation and enable the start of supplies to the international market.

On May 29, 2020, Avifavir received a registration certificate from Russia’s Ministry of Health and became the first Favipiravir-based drug in the world approved for the treatment of COVID-19. On June 3, 2020, the Ministry of Health included Avifavir in the latest seventh edition of the guidelines for the prevention, diagnosis and treatment of new coronavirus infection COVID-19. Avifavir has proven effective in clinical trials, disrupting the reproduction mechanisms of coronavirus.

RDIF and ChemRar have seen significant demand for the drug from abroad. In particular, negotiations are underway on the supply of Avifavir to a number of Latin American countries. In addition, CIS countries, the Middle East and other global regions have expressed interest in acquiring Avifavir.

“Avifavir is one of the world’s most effective coronavirus drugs and produces better results than its peers, including the US drug Remdesivir made by Gilead Sciences. Given the US authorities’ decision to purchase almost 100% of the manufactured Remdesivir in the coming months and the shortage of effective drugs on the global market, Russia is ready to help other countries in the fight against coronavirus and begin exports of Avifavir. The Russian drug is several times cheaper and its tablet form makes it easy to take allowing therapy at the early stages of coronavirus infection. More than 50 countries have already expressed an interest in the drug. RDIF and ChemRar intend to expand Avifavir’s production and widen its supply geographically over the coming months.”